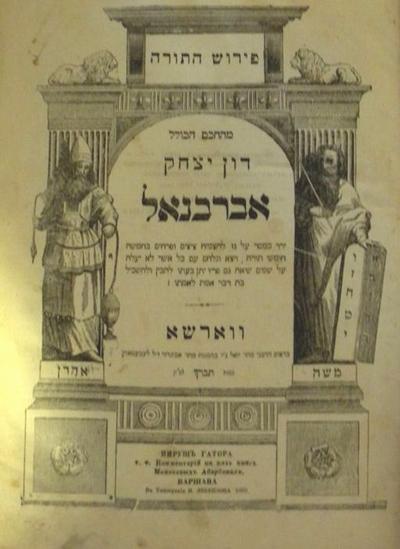 Abravanel’s multifaceted commentary on Tanach enriches readers. It constructs cohesive themes alongside detailed focus on each verse. Shining through its prose is an educator who approaches Judaism and its Holy Writ as an organic whole. Fired by profound passion and a burning penchant for truth, its author viewed Torah as a book of mysteries waiting to be pried ajar, revealed and neatly compartmentalized. His written word is his bequest to posterity, a priceless gift of Jewish wisdom and sagacity.

Abravanel brings a host of tradition and intellect to bear in his seminal Bible exegesis. The marvelously vast storehouses of source material at his disposal far exceed mere inspiration of awe. A master in both Written and Oral Law, not to mention the full gamut of medieval Tanach commentaries, an acutely traditional mindset defines his epistemological reality. Besides classic Jewish texts, he was well-versed in Ancient Greek and Roman treatises. Jewish and secular history books lend breadth to his writings, and even Classic Christian Biblical commentaries are considered on their merits.

Reverent and probing, Abravanel’s bar-no-holds approach utilizes a question and answer dialectic. Each segment – as divided by Abravanel’s piercing analysis begins with several pointed queries. Resolutions offered by past giants are put on the operating table, vivisected, and often manhandled. The main body of Abravanel’s commentary is presented with the aim of providing his own answers. Interspersed are mini-essays, midsize discourses or full-blown exposés of the most profound philosophical nature. Collectively, they provide readers with a most dynamic presentation and daunting challenge. Ultimately, they weave exquisite fabric on topics that man yearns to better comprehend.

Existential questions such as these are addressed with utmost confidence. Concomitantly, Abravanel would not neglect commentary on the unfolding Biblical narrative. Thus, logic and analysis pair with Jewish Tradition to teach students about the Garden of Eden. Was it metaphorical or literal? In the face of Adam’s sin, he dissects man’s inclination for good versus evil.

Other issues tackled in his commentary on Bereshit include those that niggle in the minds of all Bible scholars and students:

And moving to the Book of Exodus (Sefer Shmot), Abravanel sheds more light as he elucidates:

In the Book of Leviticus (Sefer Vayikra), Abravanel’s introduction is both striking and penetrating – a lengthy exposé on sacrifices.

Vayikra Vol. II covers the Jewish festivals as well as attitudes on sexual intimacy and charity, subjects that characterize a holy nation:

Don Abravanel’s works make for compelling reading. Deservedly, a place is reserved for his works on the bookshelf of those unwilling to compromise or shortchange their Bible studies. He is indispensable. His vision majestically sums up the bygone era of medieval Torah commentary. If contemporary books of homiletics and Jewish weltanschauung gently mine precious metals from Torah’s nooks and crannies, Abravanel forcefully pries open storehouses of unimaginable wealth to be garnered from its regal palaces and castles.

Abravanel’s World of Torah encourages and enables the English-speaking public to join those who have embarked on the exciting journey along the trail blazed by Don Yitzchak. It promises to be a most rewarding experience.